If there is one thing I heard over and over during the time of Zimbabwe’s worst economic troubles, it was, “How on earth are you surviving?” This from both Zimbabweans and foreigners. Inevitably the answer would be, “We make a plan”, because that’s the Zimbabwean way, and that’s what we have always done.

It’s a little hard to explain to an outsider. There are many who have said that if what happened to Zimbabwe had happened to any other country in southern Africa, the result would have been far worse. My personal opinion is that what happened to us was more than the result of the farm invasions and poor government policy. We became caught up in a perfect storm of post-independence euphoria and a certain lack of attention to warning signs, religious adherence to poorly crafted World Bank and IMF plans, and perhaps an over-reliance on one aspect of our economy- agriculture. Well before the farm invasions, the Zimbabwe dollar was showing signs of stress, and the drought years of the 1990s had already put pressure on our economy. I remember the worries of farmers in the 1990s, the talk of the national herd being depleted, and people wondering how on earth one could exchange Z$5 for US$1. Pretty funny to think about now.

It feels like we’ve “been sifted”. It is hard to imagine, looking back, how we ever survived the season that followed. I was one of those Zimbabweans who stayed (although I enjoyed a brief hiatus in Botswana, when I had left for personal reasons). The first hint of trouble stirring was when I was at the University of Zimbabwe, and the suppression of the usual demonstrations by students was becoming increasingly violent, leading eventually to the death of a student. We heard whispers then of a party being formed with worker’s union roots, and sure enough, just over a year later, the MDC was formed. In 1998 we had the bread riots, when Morgan Tsvangirai became a national voice, and those riots were the symptom of the economic mess that was coming…. Things went downhill from there- and it’s been ten years.

How did we survive? How did we survive the fuel queues which eventually went away when there was no fuel to be had anymore? How did we survive the stacks and stacks of cash which later being such a source of merriment, the “bricks” we carried around in such small denominations that we had to hand over a brick to get a loaf of bread- when we got bread? How did we manage the hours or days or weeks of power and water cuts? How did we manage the cash shortages, or the empty shelves at the supermarket which meant that there was no food to be had locally? Or how we have dealt with falling ill and going to hospital to find no drugs, no doctors, no nurses, no food, nothing but a bed?

We made a plan.

First we queued for ourselves and other people, and made jokes about fuel queues while we stood around in them and made new friends. Then we bought our fuel in Botswana or South Africa, eventually getting fuel traders- with tankers and small vans- to bring us our fuel in tankers or drums or 5-litre plastic containers. Cross-border traders- women who left their families to cross borders to Zambia or Botswana or South Africa stood in queues at service stations for us. We walked or cycled to work, come rain or shine. We drove at forty kilometres per hour to save fuel. We got the cash somehow, and haggled and converted and counted to a trillion in our heads, and bartered and stayed in business until we couldn’t anymore, then we tried a different business. Supermarkets sold tea leaves and sugar and jam, or nothing, but opened their doors day after day. Bread came and went, and changed in size (so standard didn’t mean the same thing from week to week), and the price changed daily when bread was to be had, and sometimes even when it wasn’t. We built fires to cook over, and went to people with boreholes to get water, or got generators. We used candles or battery-powered lamps for lighting, or we slept early. We learnt that even though there was no schedule to the water cuts, we could work our way around them by doing all our laundry when we heard the trickle into the water geyser. We learned to boil or filter our drinking water, and not to keep too much meat in the house. We learned to do all our shopping across borders- from perishable food to dry goods and clothing, and got quite handy with other people’s currencies. And we learned to buy not just for our households, but for others, too. We didn’t “get sick” until the cholera outbreak, which was more illness than we could handle by staying at home and nursing ourselves back to health.

And through it all we griped when we couldn’t handle it anymore, or left the country to find something better, to send money back home; but mostly we just stayed put and made jokes about it, and managed somehow. We looked to extended family, and looked after each other. We had braais (barbeques) when we had meat, and let down our hair. We worked hard in between, knowing that if we didn’t, we might not eat the following day. We did without movies and the mall, and when we went out for coffee, we made do with whatever there was- tea, soft drinks, black coffee, a slice of cake or lemon meringue or whatever was on the menu. Sometimes it got hilarious; we went out to a pizza place one night, and all there was on the menu was a pizza base with tomato and garlic on it- like a marguerita pizza, but without cheese- no meat, no other vegetables. We laughed and ate.

I spoke to people in business who stayed open waiting for things to change, even though they couldn’t pay their staff. I talked to farmers who had had their farms taken away, and were now running a retail business, selling no name brand cleaning products, and earning a living that way. I spoke to factory workers who were going in to work once a week, and earned their salary in kind (whatever foodstuffs were available), rather than cash. I spoke to a woman who had travelled from Chivhu to Bulawayo for medical treatment (about three hours by road), because although there is a hospital there, there was no point in trying to get treatment there. As they shared their stories, I wondered about the thing about the Zimbabwean that made them deal with everything with such grace. Everyone struggled, but we managed somehow.

And our future? I believe in us, truly I do. If the same can-do attitude can be applied to the mammoth challenges facing us, we will recover. It may not even take as long as so many seem to think. Maybe it’s a matter of there being nowhere left to go but up; or perhaps just as with people, the national character had been strengthened by adversity. I do know this for sure: seeing how people tackled an impossible situation, and worked hard, and kept smiling, made me proud to be Zimbabwean.

The House of Stone 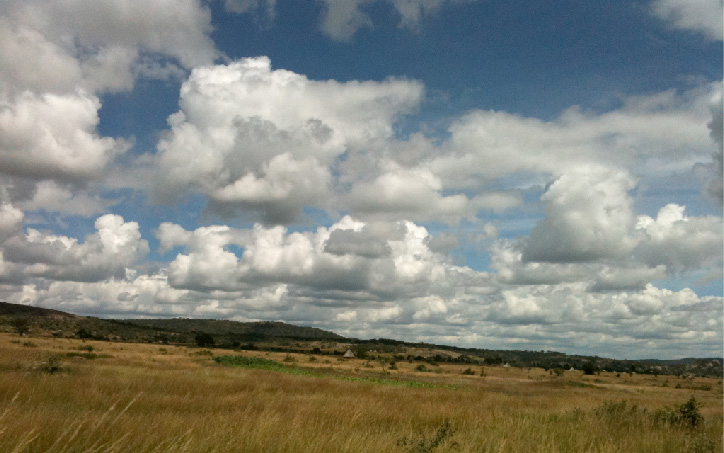